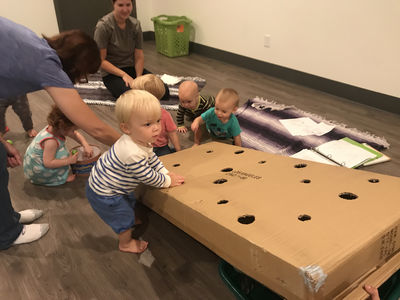 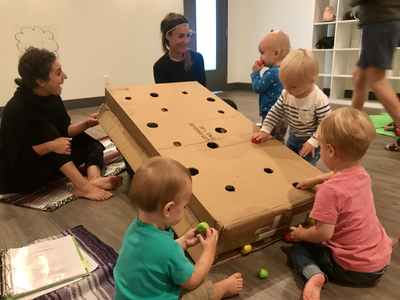 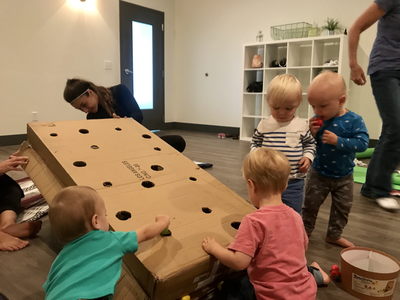 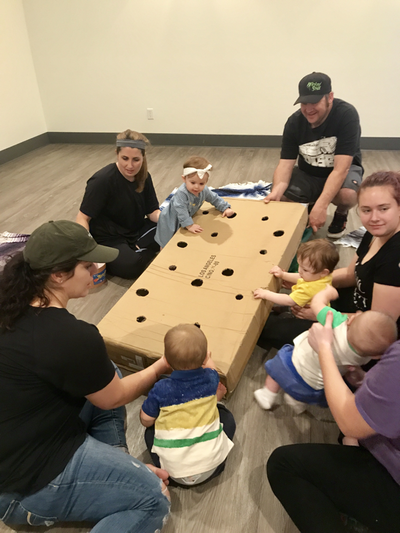 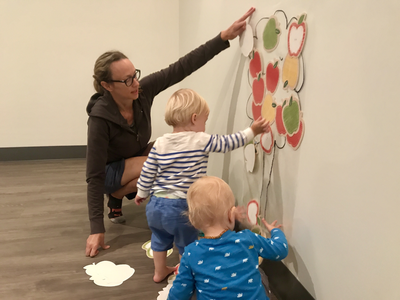 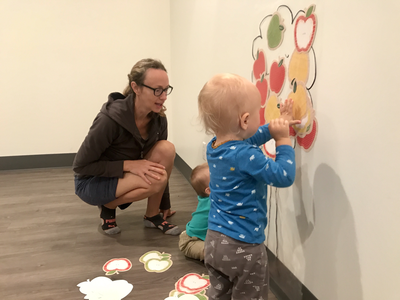 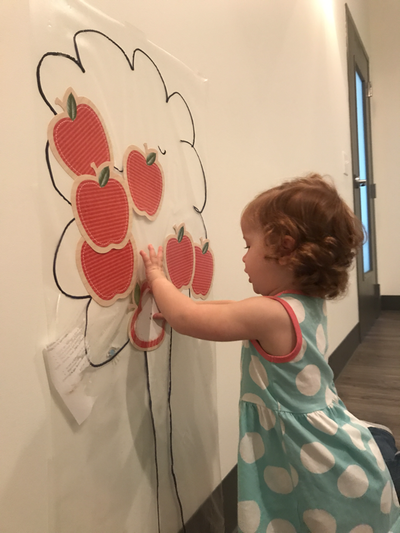 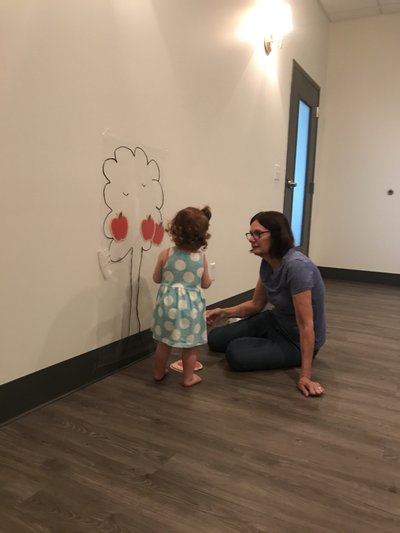 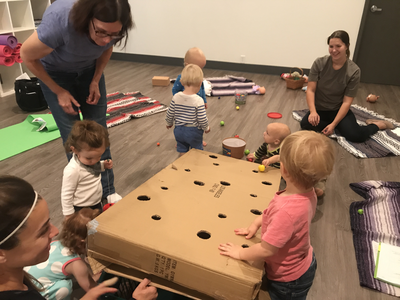 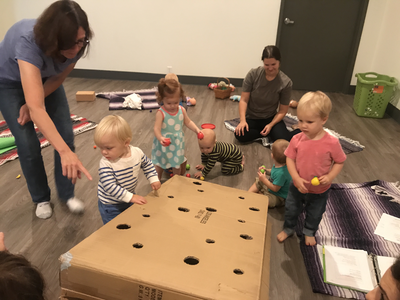 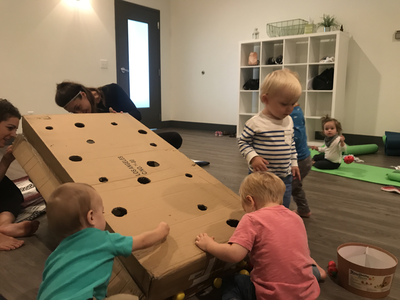 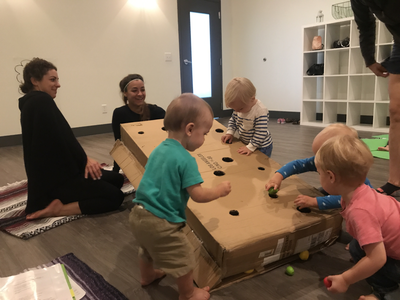 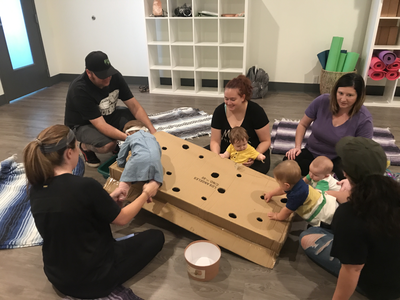 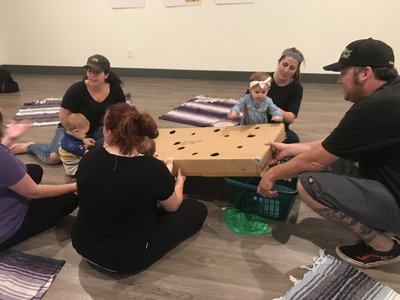 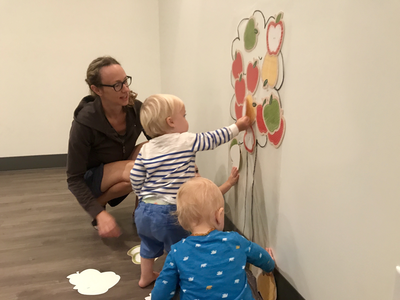 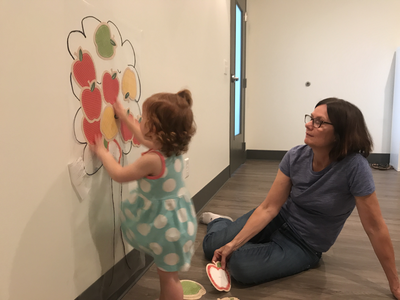 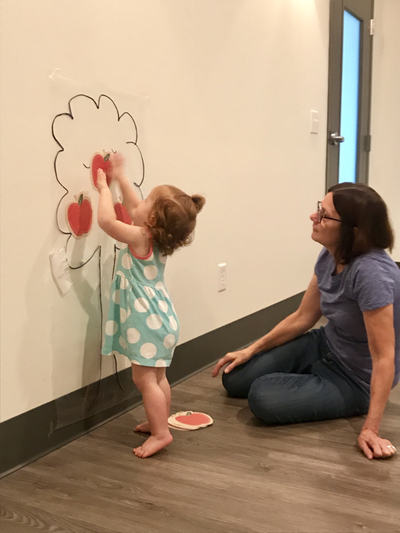 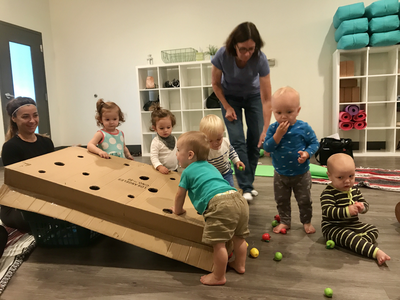 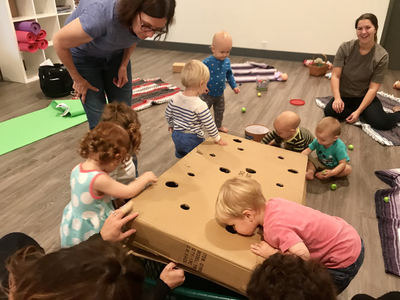 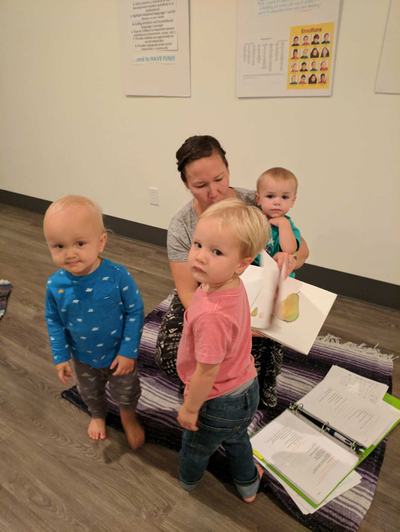 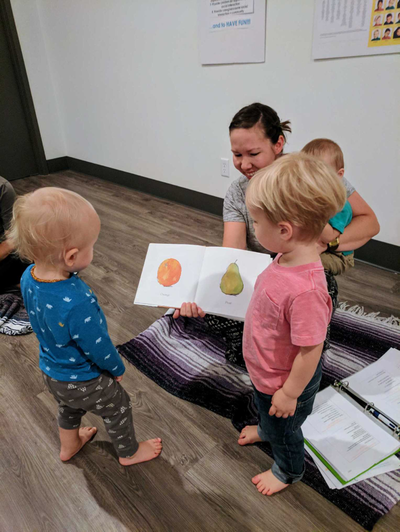 Some tidbits about APPLES:
**Keep in mind: RAW apple is a big choking hazard for children who do not yet have matching molars (a matching top + bottom molar that can be used to chew food). For this reason, please finely dice raw apple, cook it, mash it or put in a mesh feeding bag.
Signs we learned in class:

All you have to do is IMITATE your baby. It really is that easy!

Here's a printable handout with this same information.

Step 1: Make the same sounds and movements that your baby does. If he is saying “oooooh,” wait until he is done, then you say “oooooh.” If she is clapping, wait until she is done and then you clap! It’s really as easy as it sounds.

Step 2: Once your little one realizes that you are doing this, they will be interested! Continue to take turns talking/moving in a back-and-forth manner until they lose interest.

Step 3: After your kiddo has gotten the hang of this game (could be hours, days or weeks after you started, depending on their age), start by imitating them several times, then change up the sound/action just a little bit to encourage them to now imitate you.

Games like pushing cars back and forth, putting shapes in a shape sorter, or blowing bubbles are all great activities for implementing turn-taking and imitation. It is easy to manipulate those activities for “my turn,” “your turn,” as well as adding a sound to each part of the activity. When you add a sound or word like, “in” while putting a shape in the shape sorter, try giving your child a little extra time to imitate you before you take another turn. I sometimes cover the hole on the shape sorter and look at them expectantly until they make some kind of attempt at imitation, then I uncover the hole and reinforce their attempt by saying something like, “in, you said in!” Try manipulating your play a little to allow for more turn-taking and imitation and I’m sure you will be excited to find out what your little ones are truly capable of.

I was sitting with my 10-month-old son on the floor to play with a set of balls. He had a ball in his hand and he was shaking it while saying, “aaaah, aaaah.” I picked up a nearby ball and shook it in the same manner and made the same sound, “aaaah, aaaah.”  He immediately looked up at me as if to say, “Hey, you want to play?” And we did.

As we played, he continued to make the “aaaah, aaaah”  sound for his ball, and I continued to imitate him. By doing this, I was able to keep the interaction going which resulted in reinforcing the concept of turn taking in conversation.  After awhile, he seemed to anticipate my turn by looking up at me and waiting for me to imitate him.  When he did, I tried introducing a new sound to our play. I said, “ball, ball” for my ball and he in turn said, “ba, ba.” This exemplifies how turn taking and imitation can help our children learn new actions, sounds or words to improve their communication skills.

The same goes for teaching new sounds. Let’s say the only sounds your child makes are “Ooh” and “Ahh.”  When he vocalizes “Ooh” you say “Ooh” when he says “Ahh” you say “Aah.” Then after awhile try introducing a new sound like “Eee” and see if he will try to imitate you.   It is important to remember that by only changing the routine a little (adding one new sound or action) makes it more likely that your child will be successful in imitating you back.  If we jump too far ahead (for example: going from “Oooh” to “juice”), your child may make no attempt at imitation.  In this situation you would want to use turn-taking and imitation to teach new vowels and eventually new consonants.

We are always teaching our babies about communication. When we respond to their cries by comforting them or feeding them, we are teaching that their cry (communication) causes a reaction from us.

As parents, we have the opportunity to reinforce actions, sounds and words – and when we imitate their actions, sounds and words, they are learning:
We can use turn taking and imitation to train skills by first imitating whatever actions we observe our babies or toddlers doing. By taking turns imitating him, he will eventually take turns imitating you and you will then be able to introduce more meaningful actions like signs, or more meaningful sounds, like words.
What to Do When Your Child Refuses a Food: See the handouts below for some strategies. Keep in mind that eating is not a "pass/fail" activity where "eating" the food is the only measure of a successful meal - there are so many positive interactions that can happen outside of actually eating a food! Use the Journey Toward Eating to spark some ideas of other ways to positively interact with food (smelling, touching, licking, etc.).

NEVER (I repeat, NEVER!) force your child to eat or "sneak" bites in. While it may feel like a good short-term strategy in the moment, you are really setting the stage for distrust and power struggles in the future. These are the kids I tend to see in feeding therapy. See the "Whose Job" handout below as a reminder of what YOUR jobs are during meals if this is a tempting strategy for you or others. You may need to explicitly tell grandparents, babysitters or other caregivers that you do not want your child fed in this manner.

How to NOT Say "Take Another Bite" + Journey Toward Eating
​The Diet of 1 Year Olds
Whose Job is Who's? The Parent's Job During Meals vs. the Child's Job

BOokS FOR TALKING ABOUT APPLES